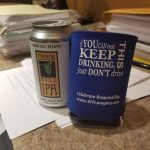 Rich Gibson, the newly elected State’s Attorney for Howard County joins the lawyers for a tasty beverage.  Part 2!!! Rich has a long career as a prosecutor.  He started out in Prince George’s County and then spent 12 years in the Baltimore City State’s Attorney’s Office handling murders, shootings, and major investigations before being elected to the top job in his home county.  He has a ton of experience and will bring that experience and knowledge to his new job in Howard County.

We’re very excited because technically Rich is our first repeat guest.  Due to some technical issues which we’ve solved with new recording gear, part of that episode was lost and a 2nd part episode will be in the “archives” and should be aired soon.  Because Rich was such a good sport about coming back on, we decided to allow the guest to select the beverage.  Rich is a true beer aficionado and hopefully his Ellicott City hometown brewery is up to par!  This week we are very excited to, for the first time, sample 2 beers from Ellicott City’s own Manor Hill Brewery.

Top topics include a deep discussion into the life of an elected politician and how Rich’s new job differs from what his expectations were.  Plus what his plans are for the Howard County SAO.

This week the guy’s discuss (across both episodes):

Manor Hill Brewing is a family owned and operated.  Their CMO, Corey was kind enough to send us some great tasting notes on the beers that we are sampling, which is quoted below, and can be found (some) on their website.  I cannot thank him enough for getting back to me so quickly.  If you haven’t been to any of their restaurants before, I would strongly encourage you to support local businesses!!!

As far as the brewery, we truly are a family-owned and operated organization, with me(Corey), my wife, her sister, and their parents all actively involved in the day-to-day of our farm, brewery and three restaurants.  We are a working farm with cattle, chickens, crops, and more.  Our story has its roots in craft beer (via our first restaurant, Victoria Gastro Pub) and farming (the home to our brewery).  We are Maryland’s largest production farm brewery and can be found throughout MD, DC, and DE.  We have a pretty diversified portfolio of beers ranging from traditional styles (pilsner, amber, IPA, porter) to newer/trendier styles (smoothie ales, sours, barrel aged stouts).  Best of luck on the podcast and hope you are able to make it out for a visit sometime.

Manor Hill IPA is our our flagship beer and we’ve been brewing it since day 1 (June 2015).  It’s also our best seller.  Our vision for that beer (and many of our IPAs) is to use hops for aromatics, not just for bitterness.  So the beer is going to smell good before you even take a sip.  It’s also considered more juicy than bitter due to the dry-hopping from the mosaic hops.
Hayes Creek is brand new to our lineup this spring/summer intended to be a warm weather seasonal (meaning it will be available in Spring/Summer from here on out).  It is slightly tart and very refreshing.  The name derives from one of the small waterways behind our farm and is also the middle name of one of the owners, which is a cool tidbit!
Lawyers on the Rocks features Jeremy Eldridge, Kurt Nachtman and Adam Crandell. This triumvirate of lawyers will give you their unsolicited opinion on everything legal and illegal, while enjoying a handcrafted cocktail. Lawyers on the Rocks is sponsored by the Law Office of Eldridge, Nachtman & Crandell, LLC and produced by Up Next Creative, LLC.