Bruce stays on with the guys for a second episode.  Bruce is still sipping on the excellent Cooper’s Coffee and the guys sample “The Godfather” in honor of having Bruce on the show.  The Godfather a.k.a. The Bruce White is a simple whiskey cocktail originated in the 1970’s with the popularity of the Marlon Brando and Al Pacino characters in the movie The Godfather.  It consists of:

This drink was sampled with Bourbon, but it probably would go best with a Scotch or maybe a Rye, due to the sweetness of the Amaretto. The bourbon and Amaretto really made for a surprisingly sweet drink, which would be better balanced by something less sweet.  Overall the drink was rated as a surprise “excellent” and something that might be a good change of gears from an Old Fashioned. 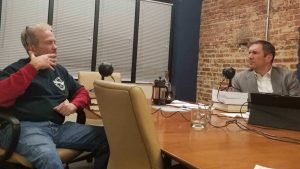 On this episode Kurt finally stumps Jeremy and Adam in this week’s “I Can’t Believe it’s not Baltimore:

Bruce’s company is called One Promise Recovery Housing.  You can read a City Paper article about Bruce here. 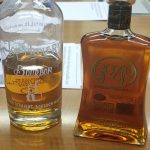 Lawyers on the Rocks features Jeremy Eldridge, Kurt Nachtmanand Adam Crandell. This triumvirate of lawyers will give you their unsolicited opinion on everything legal and illegal, while enjoying a handcrafted cocktail. Lawyers on the Rocks is sponsored by the Law Office of Eldridge, Nachtman & Crandell, LLC and produced by Up Next Creative, LLC.